Earlier this year, the FHFA and Treasury amended Treasury's preferred stock repurchase agreements (PSPAs) to put limits on Fannie Mae and Freddie Mac (collectively, the GSEs).  These limits resulted in widespread fee increases for several categories of mortgages with investment properties and 2nd homes taking the heaviest damage.  Here's a quick list of our previous coverage:

Fallout:
Calabria is Out at FHFA

Much of the sense of urgency behind the initial changes came as a consequence of the changing of the administrative guard.  Previous FHFA Director Calabria was intent on leaving a legacy as "the guy who finally shrunk the government's indirect footprint in the mortgage market."  But by early January, the clock was ticking on his office door being re-keyed for an eventual Biden appointee.

Calabria pushed the administration to use a consent order in an attempt to "lock-in" his libertarian intentions (or at least make them harder to undo).  After meeting resistance from then Treasury Secretary Mnuchin, the boldest available was to amend the PSPAs in such a way that the GSEs' portfolio composition was limited.  The most pressing implication was the need to slow the portfolio growth of non-owner occupied and 2nd home loans.

Fannie and Freddie understandably dragged their feet on this directive.  After all, it was 2021, and maybe a new FHFA director would have virtual cup of coffee with new Treasury Secretary Yellen and decide to undo the PSPA change.  A few elbow bumps and signatures later and it would be business as usual for the GSEs!  Unfortunately, the new administration's hands were tied as they waited on a Supreme Court ruling to confirm that Calabria COULD even be fired!

The weeks ticked by with GSE portfolios receiving more investment/2nd home loans than they would be allowed to keep at the end of the year.  They were forced to act, and they weren't careful about how they acted (some would say, intentionally, in an attempt to stir trade groups to political action... after all, the GSEs like to do however many of these loans they want to do.  They're profitable).   Trade groups rallied, and the Biden admin acted quickly as soon as the window opened.

(Read More: Mortgage Market's Most Powerful Person Just Got Fired. What Are The Implications?)

With all of that out of the way, we're equipped to understand what just happened this afternoon.  In a word (several words actually), the big changes to the PSPAs that started 2021's loan pricing drama have been suspended for at least a year while the FHFA and Treasury decide whether any changes were needed at all.  In the meantime, GSEs will be free to lower the barriers to non-owner occupied and 2nd home loans (i.e. decrease the "hits" that apply to the pricing on those loans).

It's not quite as simple as Fannie and Freddie changing their fees though.  In fact, most of the loan pricing drama was due to the GSEs advising certain lenders to originate fewer of these loans.  Lenders accomplished this by jacking up the rates on said loans (i.e. deterring the business by making it prohibitively expensive).

Bottom line: GSEs will have to notify lenders of the change and lenders would then decide how to proceed.  Some will make rate-friendly changes immediately while others will wait, or take a more piecemeal approach.  In short, the headline should really be that 2021's big bad mortgage fee hikes CAN NOW BE removed.  The timing and details are up to lenders and the GSEs. 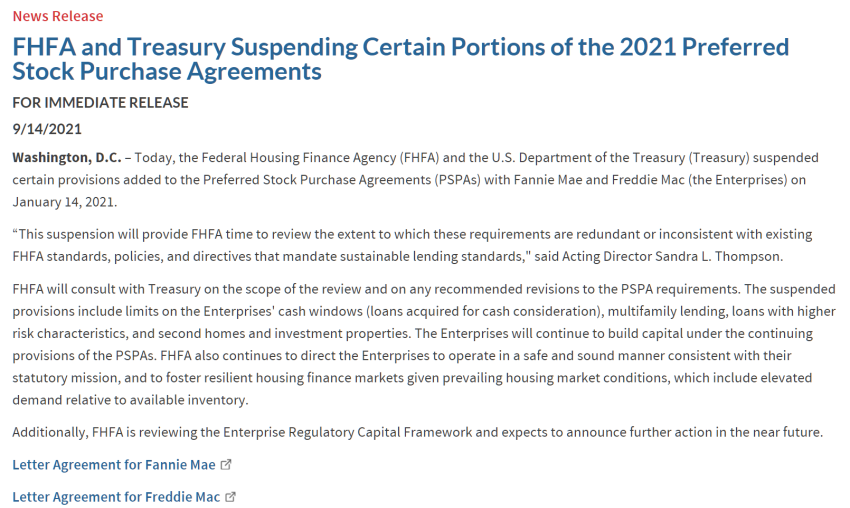