The bond market returned from a 3 day weekend to find yields surging higher on Tuesday.  That pushed mortgage rates to fresh 2 year highs and added emphasis to what has already been the sharpest rate spike since late 2016.

Why are rates rising so quickly?

Mortgage rates are based on mortgage-backed securities (MBS), which are essentially bonds that correlate quite well with US Treasuries.

The Federal Reserve (the Fed) has been buying both Treasuries and MBS off and on (mostly on) since 2009 as a part of various stimulus efforts.  Higher demand for bonds means higher bond prices, lower bond yields, and thus, lower rates, all other things being equal.

Since the pandemic, bond buying was intended to help the US economy return to full employment and "price stability."  By the fall of 2021, it became increasingly clear that the labor market wasn't going to return in exactly the same form and that inflation was going to be more persistent than the Fed expected.  As such, the Fed warned that it would begin winding down bond purchases in September, ultimately pulling the trigger at the next meeting in November.

Since then the September taper warning, longer-term rates have moved higher and experienced more volatility.  The emergence of Omicron was a hurdle that forced rates to cool off in early December.  Traders then waited for clarity on Omicron's impact and for the improved liquidity that was sure to arrive with the new year.

When new trading positions began rolling in on January 3rd, they were heavily skewed toward higher rates.  Despite surging case counts, the market was gobbling up the narrative that Omicron might paradoxically be a positive turning point in the pandemic.

2 days later, the Fed released the minutes from its December meeting which unexpectedly revealed an accelerated outlook for balance sheet normalization (the 2nd phase of the Fed buying fewer bonds).

Almost all of the drama in mortgage rates in the past 3 weeks is due to that shift in the Fed's policy outlook!

Why didn't rates just jump straight up to current levels after the Fed minutes?

These things take time.  When the Fed pivots, we tend to see one initial surge in the bond market and then several aftershocks.  It was the same when the Fed warned about tapering in September.  There are even similarities in the trading patterns that may hint at the risk of another move toward higher rates. 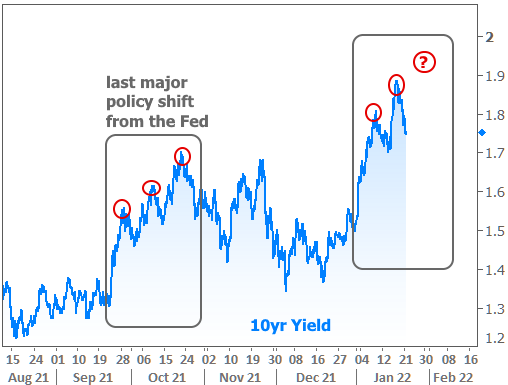 Another factor that forces bonds to avoid taking a straight line toward higher rates is the stock market's reaction to the news.  While the Fed may not be buying stocks directly, stocks nonetheless tend to pout when the Fed signals policy tightening intentions.  This time was no different, and it created the telltale "mirror image" pattern between stock prices and bond yields. 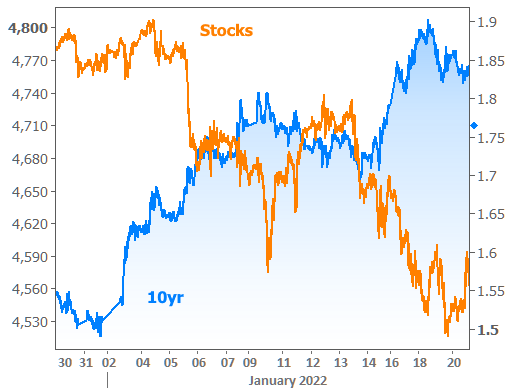 If stocks lose enough ground, some of the money being pulled out of that side of the market finds its way into the bond market.  That was increasingly evident as the week progressed with the last 2 days seeing strong correlation between stock prices and bond yields. 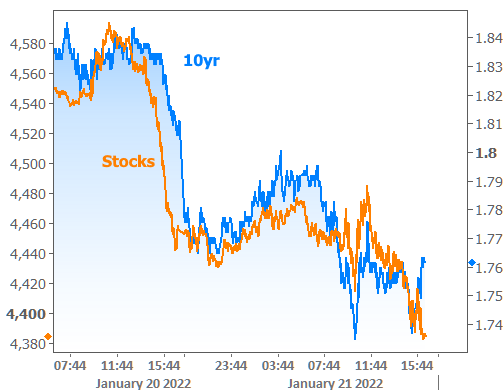 So rates are higher because of the Fed, but they caught a break due to stocks?

Yes and no.  Rates are almost exclusively higher in 2022, and they haven't recovered much.  The massive stock losses share some motivation with rising rates (both are upset about Fed policy), but they've also served to limit the pace of rising rates.

Moreover, the charts above use the 10yr Treasury yield as a representative for the entire rate market.  Mortgage rates haven't done as well as Treasuries because MBS are much more sensitive to shifts in the Fed's bond buying outlook.  The following chart shows how mortgage bonds have underperformed Treasuries since the Fed started tapering, and again following the normalization comments in the Fed minutes. 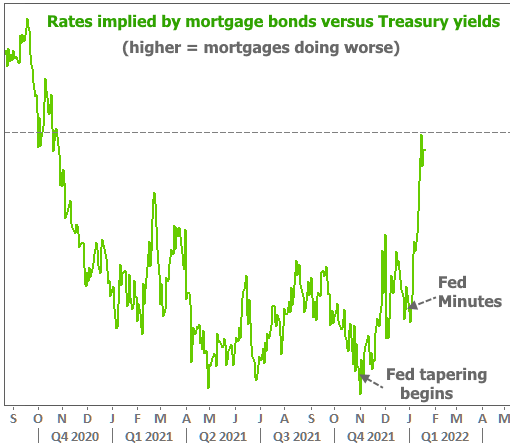 "Historically low" often depends on how far back you want to look.  We're currently much better off than most any time before covid.  If we're only looking at the past 2 years, rates are at their highs.  Refinance activity reflects this reality (low enough rates to motivate some, but high enough to bring refis to their lowest level since before covid. 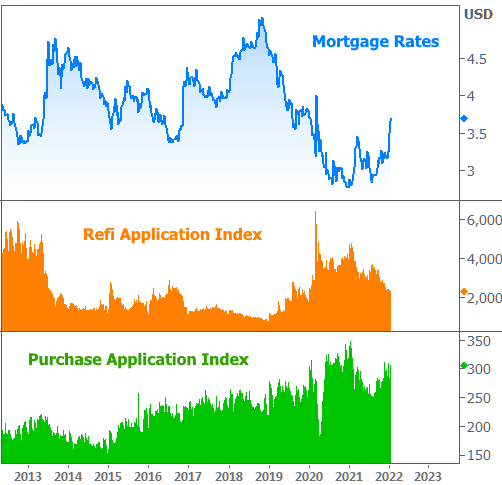 Does this have anything to do with a Fed rate hike?

Not really.  The Fed's rate hike outlook can have an impact on mortgage rates, but rate hikes themselves are often old news by the time they happen.  The market is in strong agreement that the Fed will be hiking rates at the March meeting. 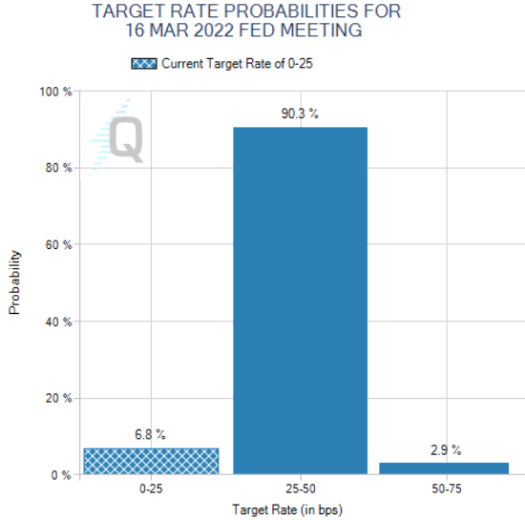 What about next week's Fed meeting?

Indeed!  Next week's Fed meeting is a focal point for potential market volatility.  The Fed will NOT be announcing any policy changes, nor will they be hiking rates.  But remember, they didn't announce any policy changes in September either.  Rates responded anyway.

Traders will be very curious to see what the Fed puts in writing about the anticipated rate hike in March and more importantly the timing of the balance sheet normalization efforts.  In addition to the written statement, Powell's press conference can also be a source of actionable info for traders.  This all happens on Wednesday afternoon (Jan 26), and it could easily serve as the jumping off point for the next big move for rates.

Could that move only be higher?

If we knew that right now, we wouldn't have much to discuss.  While the general, "all things being equal" outlook is for gradually higher rates, things don't always go as planned.  If Powell were to tap the brakes on the Fed's recently more aggressive tightening stance, rates could certainly catch their breath in a slightly more meaningful way than they did this week.

Don't take that as a prediction though!  It's merely one of several potential options.  Powell could double down on the hawkish stance and that could easily reinvigorate the recent rising rate trends.

That's a complex question to consider, but the answer is simple: only if things got unexpectedly bad.  Since the more imminent risk is for some sort of repeat of Russia's 2014 invasion of Ukraine, let's consider the market's reaction in 2014.  For bonds, the 2 most climactic months of the Crimea annexation were actually the 2 calmest months of the year. 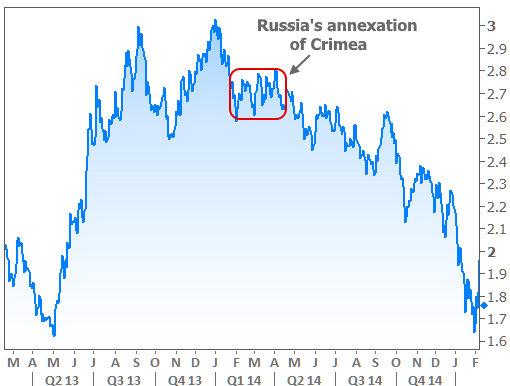