There's an obvious trend toward higher rates as far as Treasury yields are concerned.  This goes all the way back to August. 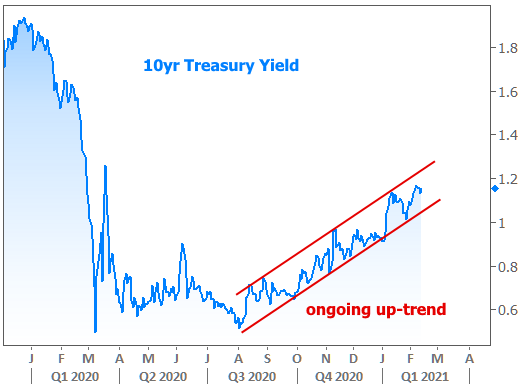 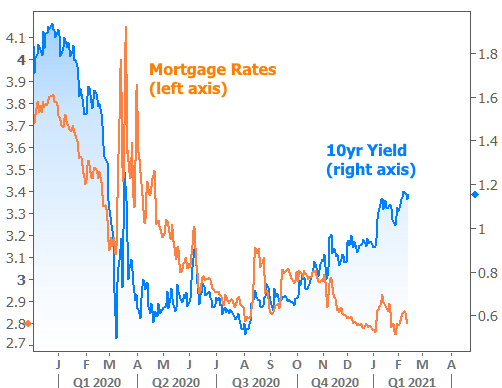 The chart above doesn't tell the whole story because it uses a separate y-axis for each line. Here's the same time frame with mortgage rates and 10yr yields on the same axis: 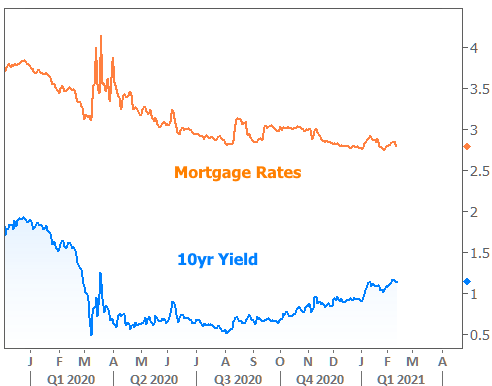 That still doesn't tell us much although we can certainly see different patterns.  Here's another look at the same two rates on the same axis, but this time we're charting the CHANGE since Jan 1, 2020. 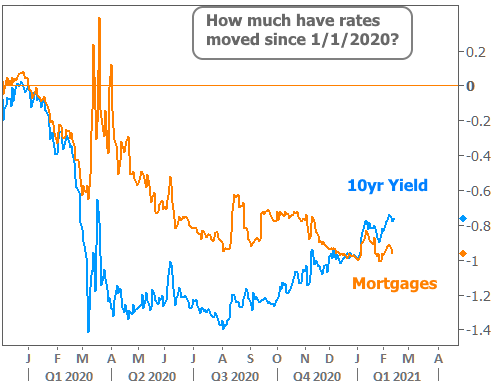 This one probably tells the story better than the rest.  Mortgage rates simply weren't able to drop as quickly as Treasury yields at the beginning of the pandemic and have been closing the gap ever since.  As of late 2020, they finally got on the same page again.

So should we expect rising rate trends to continue?  Here too, the answer is yes and no, but it's easier to make a case for "yes."  Bonds care deeply about the course of the pandemic and the economic recovery.  Covid case counts alone can explain a lot of the momentum in the past year. 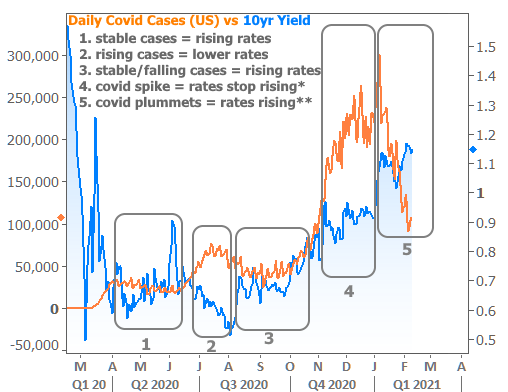 * This was a complicated time frame for bonds.  Markets were already well aware that case counts would be spiking in the winter.  If cases had only risen modestly at the end of the year, bond yields might have actually continued to rise.  But the bigger spike in cases instead helped bonds avoid making new highs for a time.   On a separate note, bond yields were pushed higher in early November due to the presidential election.

But as is always the case with financial markets, if rates were 100% certainly going to be higher, they already would be!

The jury is still out on how the pandemic reshapes the economy.  Will the 10 million missing jobs return in any significant way?  Will inflation actually move above 2% any time soon?  Until the labor market improves and inflation rises, the Federal Reserve will be doing a lot to keep rates much lower than they otherwise would be.  The biggest shocks to the mortgage market are reserved for the day when the Fed begins to withdraw support.

Fortunately, we should be able to see that coming to some extent based on data we know the Fed cares about.  This week's example was the Consumer Price Index (CPI)--one of the two big inflation reports that come out each month.

The Fed's inflation framework suggests the "Core CPI" should be 2% or higher on some reasonably sustained basis.  It was 1.6 last month and expected to drop to 1.5 this month.  Instead, it dropped to 1.4!  Translation: inflation is moving the wrong direction if it's trying to scare mortgage rates.  Granted, this is just one report and things can change in coming months, but it speaks to a relatively lower sense of urgency until further notice.

Next week brings a market closure on Monday for Presidents Day.  After that, there are several relevant economic reports on tap, with the headliner being Retail Sales on Wednesday.  If the data is stronger than forecast, it implies upward pressure on rates.  Any significant progress on stimulus legislation could add to that pressure.

Now For The Nerdy Addendum!

So why have mortgage rates been able to outperform Treasuries so much, and why might those good times be running out?

1) Mortgage bonds vs Treasuries. Although mortgage-backed bonds (what mortgage rates are actually based on) tend to correlate very well with Treasuries, that relationship has been more volatile than ever before since Covid.  Mortgage bonds have done much better than Treasuries since September.  When that happens, lenders have more pricing power (i.e. they have room to drop rates or keep them low, even if Treasury yields don't agree).

Yes, this has helped mortgages outperform, but have we seen the limit of this outperformance?  Charting the spread between mortgage bond yields and Treasuries provides answers.  Outperformance (i.e. the lower the blue line goes) is at record levels.  It will have a hard time moving much lower. 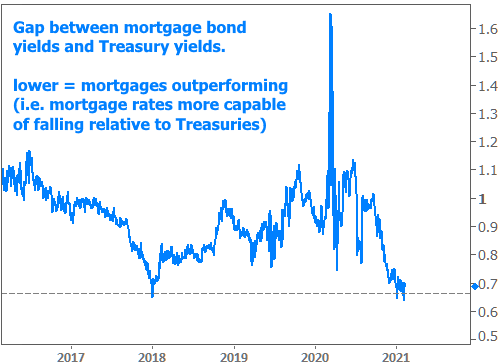 2) Treasury-specific concerns.  This is more of a sub-component of the previous bullet point because anything that's bad for Treasuries specifically will also be good for the spread between mortgage bonds and Treasuries.  In other words, "some stuff" is pushing Treasury yields higher, but not mortgage bond yields.  Said "stuff" mostly has to do with large amounts of Treasury bond issuance.

3) Mortgage Lender Margins.  This is arguably the biggest deal here, and perhaps the easiest to understand.  Mortgage lenders simply couldn't drop rates as fast as Treasuries OR mortgage bonds suggested earlier in 2020.  They would have been overwhelmed, and the rapid refinances of just-issued bonds would have done serious damage to the mortgage market.

The following chart measures the gap between mortgage rates and mortgage bonds.  The higher it is, the more cushion lenders have.  That cushion can be used to absorb bond market movement that would normally imply higher rates, or it can be used to bring rates lower when the bond market is flat.  Either way, it's starting to get thin.

Granted, it might look like there is a lot of cushion remaining, but as we've discussed time and again, there is a "new normal" that will be higher than the previously normal range.  The fact that we've bounced a few times at 1.35 means we might be looking at the new normal. It's too soon to tell if this will be a new "floor" for the range or just a temporary road block. 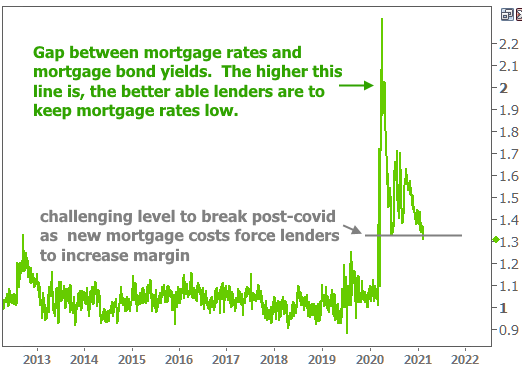