That would be nice, but unfortunately, that's not how it works.  The Fed dropped its policy rate to 0% back in March--the same place it had been for nearly 6 years after the financial crisis.  Mortgage rates were in completely different territory during that time and they've often moved in the opposite direction since then. 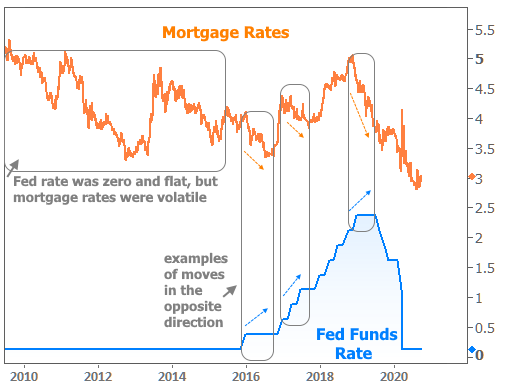 With this in mind, how can we say the Fed is so important to the bond market and mortgage rates?

First off, there's a clue in the chart above.  Although we can highlight time frames where the two rates moved in opposite directions, it's not a coincidence that they generally moved higher together in 2017-2018 and decisively lower since then.  Correlation is indeed much more reliable over such long time frames, but for those interested in the here and now, the Fed Funds Rate does us little good.

This is actually quite understandable given that the Fed Funds Rates governs overnight transactions between large financial institutions.  That's a very different scenario than a 30yr fixed mortgage and, as we know, different scenarios (and especially different time frames) have a big impact on rates.

Fortunately, the Fed Funds Rate is only one of its policy tools.  Far more important to the mortgage market is the Fed's ongoing purchases of mortgage-backed bonds.  This is a key reason mortgage rates have been so low and stable.  In fact, the Fed's bond buying would allow for mortgage rates to be even lower than they already are, but mortgage lenders have had to tap the brakes in order to cope with volume.

In other words, lenders haven't needed to drop rates any faster because they're already as busy as they can possibly be.  This could change but it doesn't change quickly.  There's also no guarantee that the mortgage bond market will be as strong in several months.  As such, it's OK to hope for progressively lower rates but not safe to bank on them.

If anything, we've seen rates more prone to move HIGHER in the past month--largely surrounding the new adverse market fee for all conventional refinances.  There was a big spike after the initial announcement in early August followed by a recovery after the fee was delayed several weeks ago.   Now that we're hitting the time frame where lenders need to reimplement the fee, rates have spiked quickly for those lenders.  Others will follow suit shortly.  These rate spikes are no surprise to readers of this newsletter.

The saving grace is for those looking to BUY a home instead of REFINANCE one.  While the new fee has done damage to rates across the board, it is technically NOT charged on purchases, and purchase rates have indeed fared much better.  Even before the fee was announced, some lenders were already offering much better rates on purchases.

Combine the historically low mortgage rates with pent-up demand due to quarantine measures in the spring and the housing market has bounced back with a vengeance.  Almost every week brings new data to support that claim.  This week's most impressive example is homebuilder confidence. 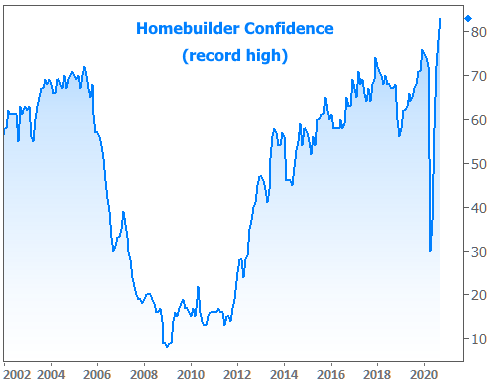 New residential construction numbers from the Census Bureau were also updated.  While they are still near their highest levels since 2007, they haven't surged in the same way as builder confidence. 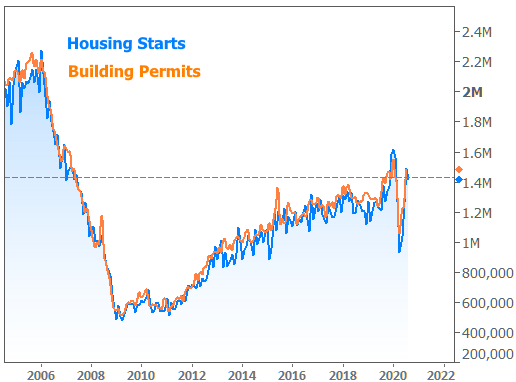 This could reflect high material costs, or simply a construction industry operating at capacity. 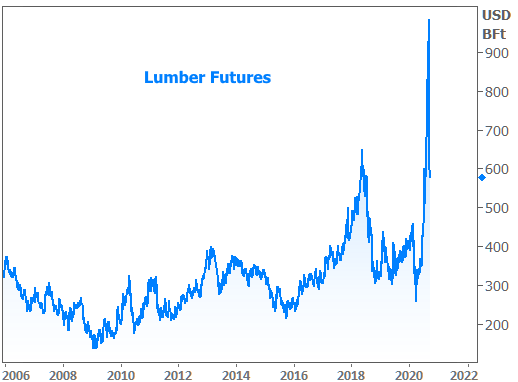 This could also be the start of the phenomenon we discussed several weeks ago where pent-up homebuying demand runs its course before cooling off into the end of the year.

No matter what happens in the coming months, much of the recent housing market strength has been made possible by the Federal Reserve's bond buying programs.  Forget the Fed Funds Rate.  The Fed's bond buying programs mean mortgage rates are 0.6 to 1.2% lower than they otherwise would be, and infinitely easier to obtain.  The fact is we really don't know what the mortgage market would look like right now if the Fed hadn't stepped in back in March.  Before that, rates were moving higher at the fastest pace... ever.

And with that, we finally come to the conclusion on what this week's Fed Announcement means for the mortgage and housing markets.  The 0% Fed Funds Rate is just one expression of their commitment to policies intended to help strengthen the economy.  While it doesn't grab evening news headlines as readily as "0% through 2023," the Fed also reiterated its commitment over the coming months to buy bonds "at least at the current pace."  So even though mortgage rates aren't 0%, the Fed is keeping them as low as they possibly can be until further notice.  Whether that's months or years will depend on the pace of the economic recovery and the extent to which coronavirus permanently reshapes the global economy.