Some mortgage companies have generated buzz by advertising 30yr fixed rates of 1.99%. While it is possible to obtain such a rate, there is definitely a catch.

Rates are certainly low in the big picture.  Up until this week, they were as low as they've ever been.  The average lender was easily able to do a conventional 30yr fixed in the high 2% range for ideal scenarios.  The situation has deteriorated fairly rapidly since then.  More on that in a moment.

For now, let's pretend rates are still at all time lows, because even when that was the case, 1.99% still wasn't what it appeared to be.

The key concept that will help us understand why we could see 1.99% advertised when the average lender is almost a full percentage point higher is that of upfront costs vs interest rate.  Fortunately, it's pretty simple.  If you borrow money, your lender makes money by earning interest over time OR by collecting finance charges upfront.

In the mortgage industry, the finance charge that has a direct bearing on your rate is often referred to as "discount" (aka "discount points" or just "points").  A point refers to a percentage point of the loan amount.  For instance, if you're paying 1 discount point on a $300k loan, it would be an additional $3000 upfront.

Almost any lender will be fine with getting paid upfront or over time.  They have math in place that allows you to choose whether you want to pay more upfront and less over time or vice versa.  For instance, the 4 options below could all conceivably be equal in the eyes of the lender.

For example, in option 1, you'd pay no extra upfront cash for a rate of 2.75%.  Contrast that to option 4 where someone with a $300k loan would be paying as much as $9000 upfront (or adding an extra $9000 to their loan balance if refinancing). Moreover, lock time frames can be restricted in order to get the rate down to 1.99%, and that can be very costly if the market moves in the wrong direction (as it did this week!).

The takeaway here is that someone could certainly advertise mortgage rates of 1.99% with multiple discount points in a market where the going rate is 2.75% with no points, but the advertising lender is no different than the competition.  They've just adjusted their marketing to pique your interest--no pun intended.

Bottom line on 1.99%, it's not the going rate, and by the time the downsides are factored in, pursuing such a rate may not make sense for the average borrower.

High Drama in The Mortgage Market This Week

Now let's talk about that rapid deterioration of the mortgage rate outlook this week.  It all stems from a surprise announcement from conventional mortgage regulators (Fannie and Freddie or, collectively, the "GSEs") that they will collect a new fee on all refinances.  Any loan that's not already very close to the closing table will be affected.

Some people are very mad about this.  Some people think it's no big deal because rates are already so low in general.  There's no right or wrong way to feel.  There are only the facts as we can know them.  Here they are:

The new fee is 50 basis points.  That's HALF A POINT for those of you who happened to read the first half of this newsletter ($1500 on a $300k loan).  While this might not sound significant to some, the average fee currently charged by the GSEs is just under half a point, up from a quarter point before a series of hikes beginning in 2011.

This effective DOUBLING of existing fees makes this by far the largest hike in history, and that's not even the biggest problem.

The GSEs have ways they could justify this fee.  It is true that they are entering a time window where they will be paying out claims to mortgage investors on a significant number of loans in forbearance.  In most cases, it was the mortgage servicers who'd been making those payments (certain loans require investors to be paid even if the homeowner is not paying).

If that was confusing, here's a flow chart of monthly payment money in the mortgage market:

If that chain is broken due to the homeowner entering forbearance, the servicer made the payments to investors for 4 months.  But after that, GSEs are footing the bill.

All that to say, GSEs could justify this increase by pointing to this unprecedented payout to investors.  The problem is the way the fee was rolled out--basically overnight and with significant, obvious negative impacts on homeowners and the industry.

By surprising the industry with this fee, the GSEs are effectively forcing lenders to pay them 10s of millions of dollars on loans that have already been locked.  In turn, this forces lenders to raise rates for new loans to make up for that lost revenue IN ADDITION to applying the new half point fee.

It's a double whammy for homeowners seeking to benefit from the lowest rates in history at a time where cash flow is very important for some.  This also means purchase rates moved higher, even though the GSE announcement only pertained to refis. 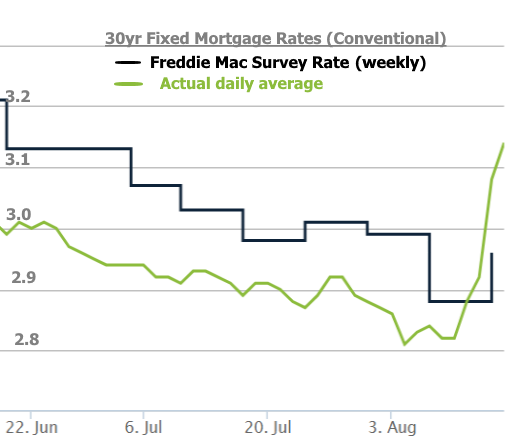 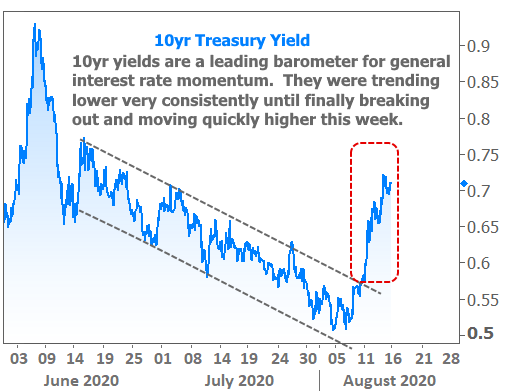 If we were just dealing with the half point fee and if it were rolled out with advance notice, we'd only be looking at rates moving up by about .125%.  Instead, the average lender was at least 0.25% higher in rate 48 hours after the announcement.  Ironically, that means a week that began with buzz about 1.99% rates will end with the average lender well over 3% for the first time in months.