Years from now when scientists examine mortgage rates in July 2020, they'd be forgiven for coming to the conclusion that rates only ever move lower. As we've learned in the first week of August, rates also rise.

To be fair, there were a few days in July where more than a few lenders moved slightly higher in rate, but it really wasn't until this week that we arguably saw a shift in the broader trend--or at least warning signs about a potential shift.

What does that mean, exactly?

It might not mean much at all, depending on where we go from here.  Over longer time horizons, it's entirely possible that rates return to recent record lows.  This week's upward movement serves as more of a warning about complacency and about being ready to lock if you happen to have a loan in process.

In that regard, August is no different than any other month.  Lenders all have certain requirements that must be met--certain documentation that must be submitted--before they'll lock your loan.  It's always a good idea to clear those hurdles ASAP as it leaves you in the most flexible position.  If scary things are happening in the rate market, you can lock ASAP!  If rates are moving calmly lower, you're ready to react whenever that changes and can rest easy in the meantime.

So is this one of those scary times?

As of right now, things aren't too scary.  Rates have certainly moved up a bit from recent lows (despite what you may have seen elsewhere), but they remain exceptionally low in the bigger picture.  The decision to roll the dice on rates coming back down is a matter of personal preference, but I wouldn't take it lightly.

We can get a sense of momentum in the broader bond market by looking at 10yr Treasury yields.  These don't directly dictate rates, but if there's a decisive shift in 10yr Treasuries, mortgage rates will likely be moving in the same direction. 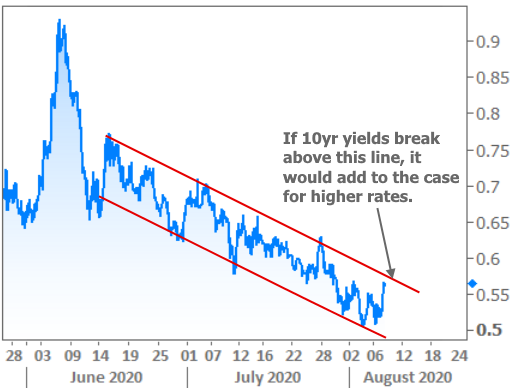 In thinking about the link between coronavirus and rates, it's easy to conclude that rates will stay low or move lower.  A lot of people have made similarly easy conclusions about market movement in the past only to find out that the market doesn't always behave logically.

To be clear, I'm NOT saying rates are destined to continue higher from here.  Instead, the takeaway from this week is that rates CAN move higher even when it looks like such a move isn't in the playbook.  Moreover, we should increasingly be on the lookout for corrections when rates have been doing one thing in a very consistent way for weeks on end. This is one of the key reasons for last week's discussion on whether or not you should wait for lower rates.

What are the key factors likely to drive that momentum (or the potential reversal)?

Past precedent teaches us that rates consistently respond to the economy.  With Friday's big jobs report--traditionally the most important economic data to the bond market--coming in stronger than expected, it's tempting to blame it for the upward pressure on rates.

In the current environment, however, traders are far more interested in stimulus negotiations and next week's Treasury auctions (where the US government sells Treasury notes/bonds to investors).  Both of these speak to the SUPPLY of bonds in the market.  Simply put, we need a lot of them to pay for stimulus and the ongoing revenue shortfall (due to things like tax cuts and significantly lower economic activity).

Like anything, higher supply means lower prices, and when it comes to bonds, lower prices mean higher rates.  Of course this is one of those "all other things being equal" kind of points.  Traders already knew about stimulus and supply.  Even so, it's not uncommon to see the bond market get a bit nervous as it waits for clarity.  After next week's record-sized Treasury auctions and additional stimulus negotiations, we'll have a much better sense of the effects on supply as well as the market's willingness to buy it!