Mortgage rates have fallen more aggressively than ever and they've been remarkably willing to set record after record. So is there any reason you shouldn't wait for them to go even lower?

This is an age old question any time rates fall to long-term lows.  In the past, the answer has been pretty easy.  If rates had fallen more than 1.5% from their previous high over the course of several years, and if something obvious happened to push them just a bit lower, it was time to refi!

For example, the Fed's policy shift (in favor of mortgages) in September 2012 and the Brexit vote in 2016 both pushed rates quickly lower.  Both were singular events with finite information, that allowed markets to react and move on.

Coronavirus has filled this role in a different way.  Like past events, it hit a market that had already seen rates fall significantly for more than a year.  Unlike past events, it's vastly more complex with implications that are infinitely more uncertain.  It's also very much ONGOING as opposed to finite.

The net effect has been an uncanny ability for rates to hit record low after record low with little apparent risk of a rebound.  In an environment like this, it makes sense that rates could go even lower, but only for so long.

Naturally, rates will have to stop setting new record lows at some point.  Unfortunately, it's impossible to know exactly when that will be (or if it has already happened).  But there are a few things we DO know.

As we discussed last week, mortgage rates were only able to fall so steadily in recent months because they jumped so much higher in March.  The following chart shows the gap opening up between mortgages and 10yr Treasury yields (often used as a benchmark for longer term rates like mortgages) and the subsequent closing of that gap. 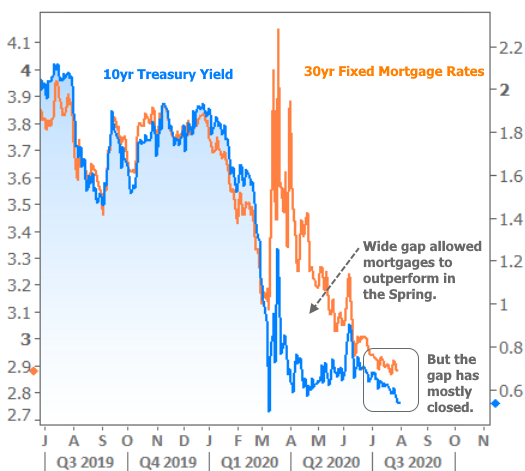 If we zoom in to a narrower field of view with the same two lines, we can see how Treasury yields have been willing to move lower even as mortgage rates have resisted. 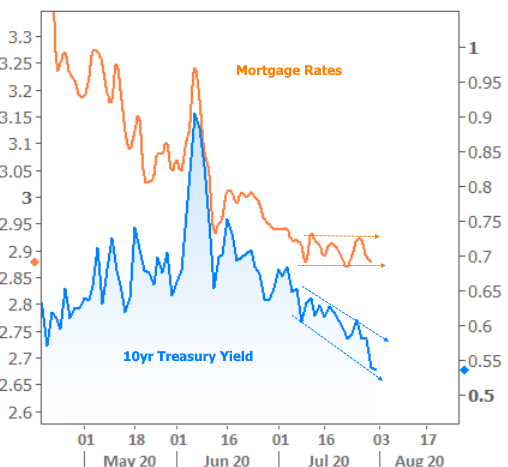 Unlike past examples where mortgage bonds were straying from Treasuries, this is actually an issue specific to mortgage lenders (and not the bond market they sell into).  We can verify this by comparing the movement in mortgage bonds versus mortgage rates.  These two lines almost always track each other perfectly.  We've never seen them open up this kind of gap before. 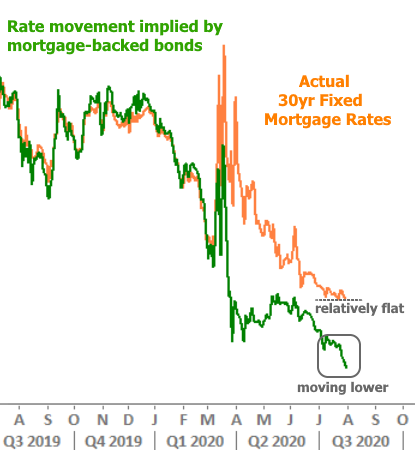 So you should wait, right?

If you could be sure that the bond market would maintain current levels for several months, or get even better, then sure!  There would be relatively low risk in waiting.  But the flattening out of the orange lines above suggests there might not be as much benefit as you'd hope. If bonds happen to reverse course before rates catch up, you'd be out of luck.

So what's the best way to play this?

No one can say for sure, but we can look at the same math from last week to formulate a game plan that's just as good as anything.  Last week we discussed the limitations on mortgage rates due to the structure of the mortgage bond market.  Long story short, the conclusion was that in a perfect world, rates could go about 0.75% lower before facing an unprecedented level of resistance.

The great thing about that level of (potential) improvement is that if rates do manage to fall that much, it would make financial sense to refinance again in addition to refinancing right now.  This has the added benefit of allowing you to capitalize on the interest savings between now and then.  Moreover, if rates happen to move higher instead of lower, you won't have missed the opportunity.  It's as close to a win-win as we typically see in a game that can only truly be won with clairvoyance.

In other news and the week ahead...

The housing market has bounced back with a vengeance according to home sales numbers released this week from the National Association of Realtors.  The Pending Sales Index, in the space of 2 months, has catapulted from the lowest levels ever to the highest levels in over 15 years. 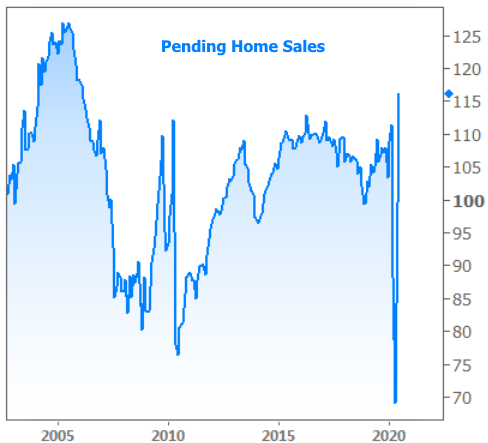 The first reading of US GDP for Q2 was released on Thursday and it was almost exactly as bad as predicted.  This was a non-event for financial markets which had long since priced-in the economic impacts of covid.

Financial markets also price in the offsetting forces from the Fed and fiscal stimulus.  The Fed reiterated its commitment in its periodic policy announcement this week and Fed Chair Powell said the accommodative stance isn't changing any time soon.

Looking ahead, next week brings the typically important jobs report on Friday as well as another chance for lawmakers to hone in on another installment of fiscal stimulus.  Earnings season continues in full swing throughout the week.