By Friday of last week, it was clear that the coronavirus outbreak was having a significant impact on markets with stocks and bond yields (aka interest rates) both moving lower. Those same themes intensified this week, ultimately paving the way for the lowest mortgage rates since 2016.

That may come as a surprise to those who believe the Fed controls mortgage rates.  The Fed concluded one of its 8 annual meetings on Wednesday and released a policy announcement without changing rates.  Moreover, they reiterated that rates weren't likely to change without a big shift in the economy or inflation.

It's true that the Fed Funds Rate is quite a bit higher than it was in 2016, and that it remained unchanged this week, but the Fed's rate only applies to overnight loans between big banks.  Mortgage rates are based on bonds that last a lot longer, and investors expect different rates of return for longer lasting loans.  The following chart shows the Fed Funds Rates along with 10yr Treasury Yields and the average 30yr fixed mortgage rate. 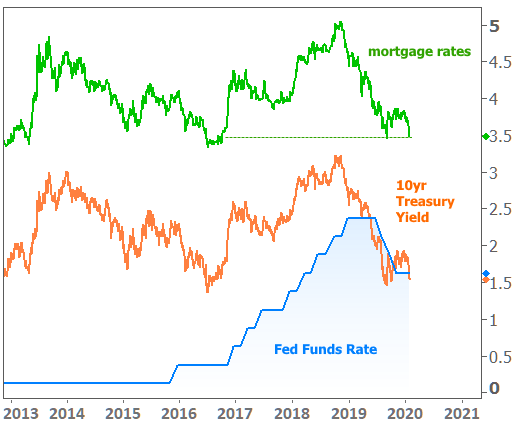 Longer-term rates fell significantly in 2019 for a variety of reasons.  Global growth concerns, the US/China trade war, low inflation, and geopolitical tensions all played a part.  After rates hit long-term lows in September, they held a narrow range into the new year.  With the phase 1 US/China trade deal signed in mid-January and a US/Iran war averted, investors were rightfully concerned that the next big move in rates would be to the upside.  But literally less than 24 hours after the major de-escalation of the US/Iran tensions, the new strain of coronavirus was announced in China.

Back then (Jan 9), coronavirus wasn't in the headlines much and it didn't seem like a huge deal to the market.  Even so, the bond market was beginning to hedge its bets based on the last time something similar happened (i.e. SARS in 2002-2003).  It wasn't until January 24th that stocks finally started to panic about coronavirus implications, moving quickly lower and bringing bond yields along for the ride.  That move gave way to plenty of additional volatility this week. 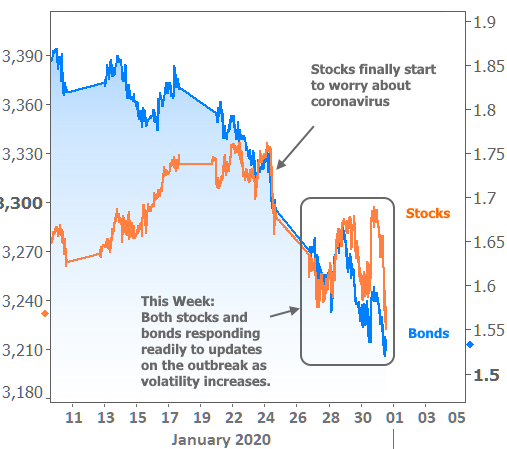 There is some confusion out there as to why a viral epidemic is such a big concern for financial markets.  Simply put, it is already having a major effect on commerce and that could be true for several more weeks or even months.  The broad notion of "commerce" is what turns the crank of the global economy.  A slower economy is less capable of sustaining high stock prices and interest rates.  Moreover, if investors are merely uncertain about the implications, they commonly move money into safe havens like US Treasuries.  As demand for Treasuries increases, rates fall.

Mortgage rates are not directly tied to US Treasury yields, but they are almost always moving in the same direction.  The average lender was already fairly close to the lowest levels since 2016 earlier this week.  So even though mortgage rates haven't fallen nearly as fast as Treasury yields, they only ever needed to fall moderately to get back to long-term lows.  The following chart overlays mortgages and 10yr Treasuries on a separate y-axis to better visualize relative performance over time. 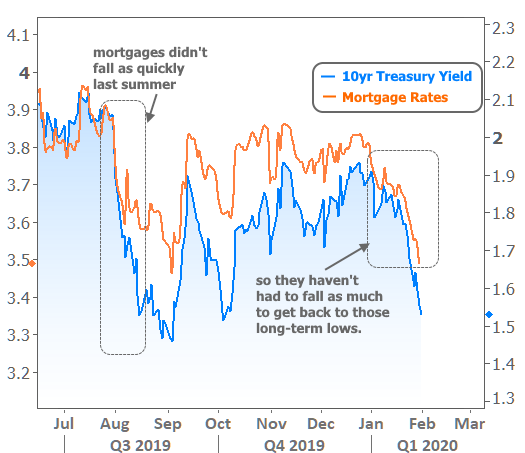 With coronavirus being credited for so much of the drop in rates, it's more than fair to wonder if we'll see a big bounce when the disease is contained.  To some extent, the economic damage has already been done, but bonds/rates are also certainly accounting for bad news yet to come.  As such, if the containment of coronavirus happens sooner/better than expected, rates would likely face upward pressure.  Even then, there would be bigger, more important questions.

Before coronavirus, rates were already resisting a move back up to the levels seen before the trade war flared-up in mid-2019.  For reference, 1.95% would be the best line in the sand as far as 10yr Treasury yields are concerned.  Before coronavirus headlines began pushing rates lower more rapidly, 10yr yields were already down to 1.80%.  That gives us two important ceilings to watch in the event of rising rates. 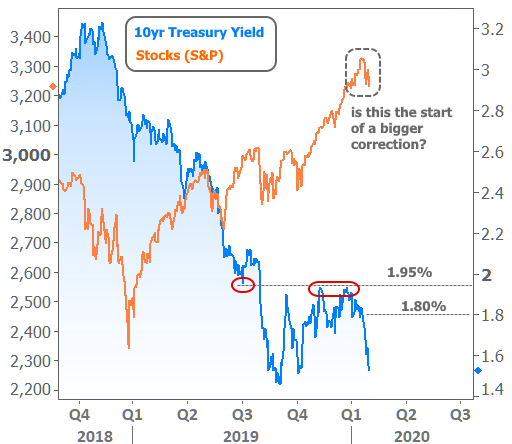 If those ceilings are easily broken, it would suggest additional upward momentum in rates (above 1.95%).  Conversely, if the economy begins to contract and stocks look like they might enter a correction, rates have a better chance of remaining in the current lower territory.  Either way, broad economic momentum is at the heart of the question.  With that in mind, next week brings several of the most important economic reports.