Things are looking up for the housing market at the start of the new year.  Granted, some of the following data pertains to the last few months of 2019, but it nonetheless speaks to a friendly shift that is arguably already well underway.

Fannie Mae's Home Purchase Sentiment Index offers a broad measure of housing market strength, and it was updated for the month of December this week to show an 8.2 percent improvement over December 2018.

There are several factors feeding into that number--all based on questions Fannie is asking consumers each month.  The biggest shift in this month's survey was among those who expect home prices to rise over the next 12 months with the percentage moving up a whopping 6 points from 44 to 50.

Consumers aren't home price experts, of course, but a consumer who expects prices to rise is logically more willing to pay higher prices.  This is one reason economists are always interested in consumer inflation expectations.

Other parts of the survey complement the conclusion about higher prices.  Job security is arguably an important precursor to making mortgage payments and according to Fannie Mae, it improved by 2 percent.  Additionally, more than 25% of respondents continued to characterize their income as "significantly higher" than it was a year ago.

And then there's mortgage rates!  First thing's first: the average consumer is significantly more pessimistic on rates than reality suggests they should be.  For instance, even as rates began to decline in 2019, more than 50% of respondents expected rates to rise and less than 10% expected them to fall.  Fast forward to the present day and 2019 ended up being one of the best years for mortgage rates we've ever seen.

All that to say that we're far more interested in how the existing percentages change as opposed to their outright levels.  With that in mind, consumers have increasingly been expecting rates to rise again ever since the sharp surge lower in August 2019.

That's actually a good thing for the housing market because the sentiment is not filtering through to other metrics that would speak to a discouraged homebuyer.  Additionally, if rates manage to defy those expectations (again), it should only reinforce the generally optimistic attitudes that are already in place when it comes to home prices and buying/selling demand.

So what is going to happen with rates anyway?!

As always, financial markets have already accounted for the entirety of what can be known about the present and future direction of rates.  Any insight available for our discussion is also already available to fuel the trading strategies of the people responsible for interest rate movement.

In other words, rates could go up, down or sideways! And the factors influencing those moves can change on a dime--a fact that was firmly reinforced over the past two weeks of geopolitical tensions between the US and Iran.

Specifically, Tuesday night was intense.  Bonds surged to the best levels (i.e. lowest rates) in more than a month, and were close to the best levels in nearly 3 months after Iran attacked several air bases in Iraq.  According to Twitter and more than a few news anchors "that meant war!"  Had that sentiment been accurate, rates would have fallen precipitously.

Mortgage rates are tied to mortgage-backed-securities which are highly dependent on the movement of US Treasuries for general directional cues.  Treasuries are an exceptionally liquid and virtually risk-free place for investors to park money during times of heightened uncertainty or economic pessimism.  Geopolitical flare ups cause demand for Treasuries to spike, sending prices higher and yields lower.  It's that yield component of Treasuries that correlates with mortgage rates.

As it stands, there was no war, although Treasuries began to move in that direction before they had all the facts.  As it became more and more likely that war would be avoided, Treasury yields moved back up toward previous levels, ultimately starting the day very close to where they left off on Tuesday afternoon.

But if rates fall in response to these sorts of risks, and if we came close to starting a war with Iran, how could that not be worth at least some small shred of improvement?!

Valid question, but an easy answer: rates had actually already reacted to the US/Iran flare-up at the end of last week after a US drone strike killed a top Iranian general.   Markets had been waiting to see what the repercussion would be.

The Iranian attacks on Tuesday provided an answer.  Yes, those attacks temporarily helped the bond market by increasing the risk of war, but by the time it became clear war was off the table, rates didn't have any reason to be pricing-in the uncertainty of the Iranian response any longer.  The following chart shows this timeline, including the Trump speech that confirmed "no war" on Wednesday morning. 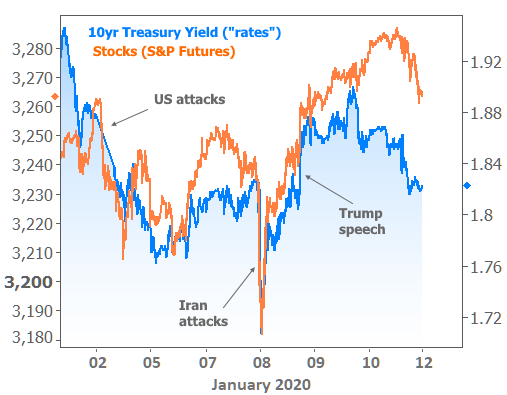 Zooming out from all the near-term volatility, we find that rates continue to operate in a narrower and narrower range.  The "consolidation pattern" seen in the next chart has been intact for months.  When these sorts of patterns finally end, it's common to see stronger momentum in one direction or the other. 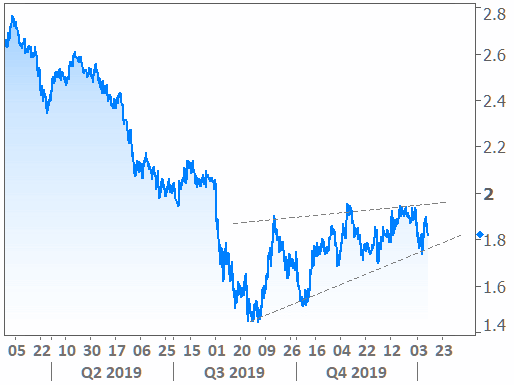